One poster offers to explain the chemistry of the world’s most popular drug.

Another teases about the fatty acids that make T-shirts feel soft.

Still another promises secrets about the oils used in making the perfect chicken nugget.

None of them offers its secrets outright, though. And that’s just how Drew Vartia, a postdoctoral teaching fellow in the chemistry department, wants it.

The posters were created by the 60 students in Honors Chemistry I, which Vartia worked on with Professor Tim Jackson. The project, Vartia said, was inspired by Rajiv Jhangiani, who spoke at KU in the spring about open education and the use of “renewable assignments” or “nondisposable assignments.” Most work that students complete never go beyond the class. Assignments and tests are created by the instructor for the instructor and are quickly disposed of by instructor and students after the class is over.

Nondisposable assignments, on the other hand, allow students to take their learning into the world or apply it to real-world problems.

Vartia wanted chemistry students to use that approach to help fellow students learn more about the invisible chemical interactions in everyday life.

“Chemistry is something that people tend to shy away from,” Vartia said. “For whatever reason, a lot of people have had a negative experience with it and so they don’t actively see chemistry in their immediate environment.”

So Vartia and the students in Chemistry 190 took chemistry to the people. 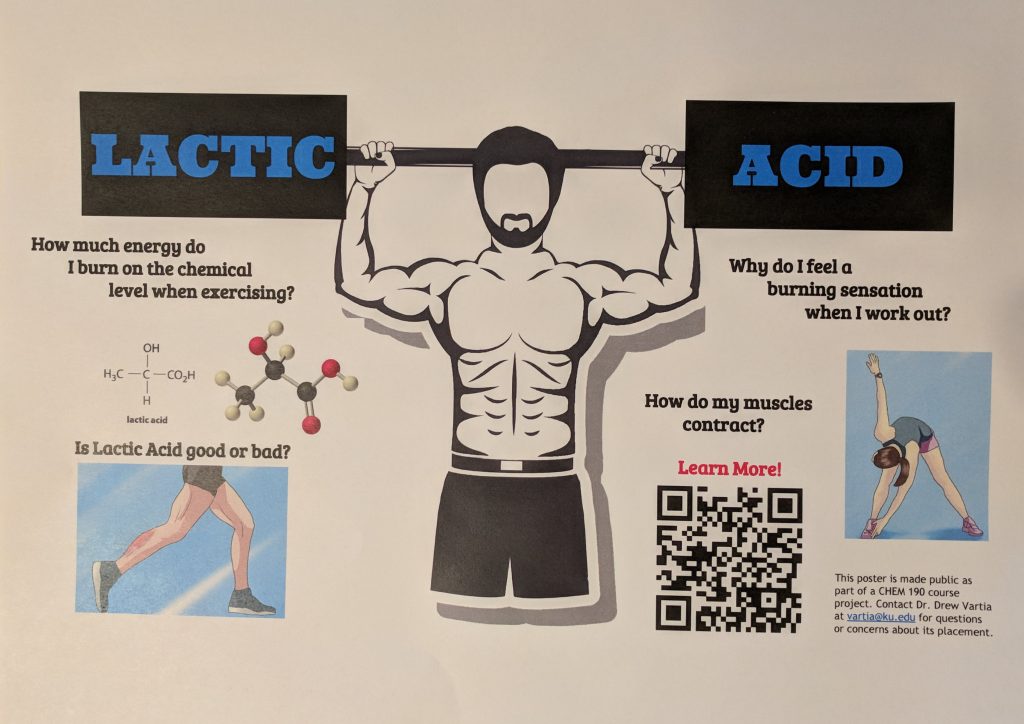 Once students had completed their explanatory material, they created posters intended to grab people’s attention and try to get them to seek out more information. To assist with that, each poster has a QR code, which allows people to scan with a cellphone and retrieve the information the students wrote. 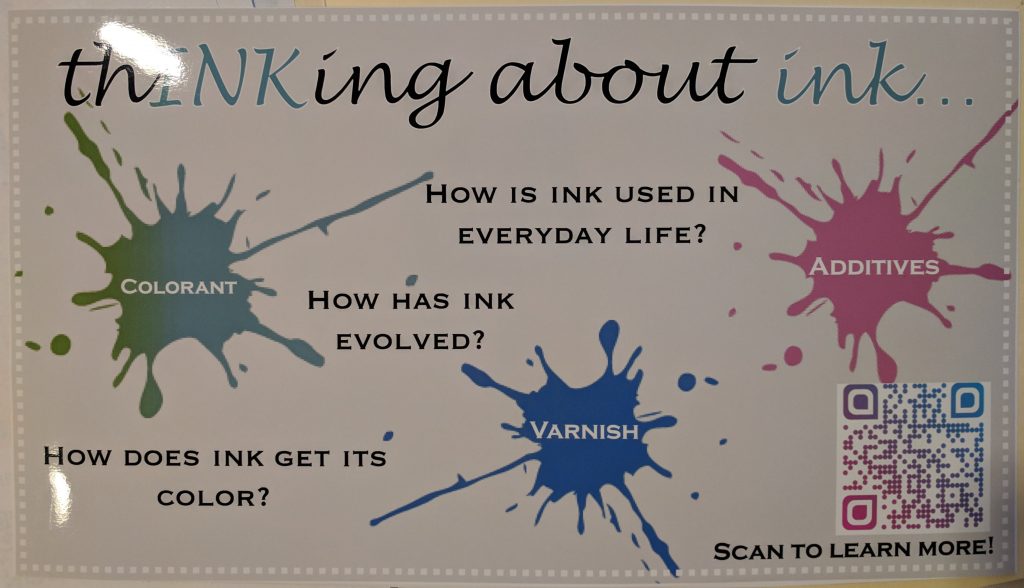 The posters, created by 15 groups of four students each, then went up in 11 locations where students were likely to find them, including the Kansas Union, The Underground, the Spencer Museum of Art, the Natural History Museum, dorms, and Watkins Health Center. Each poster was tied to some aspect of the location. For instance, one at the Roasterie in the Kansas Union focuses on caffeine, which it referred to as “the world’s most popular drug.” One at Watkins Health Center focuses on the chemistry of blood. One at the Spencer Museum of Art focuses on the chemistry of pigment, and one in the dorms sends people to information about fabric softeners, which release fatty acids that give clothes a soft feel.

Vartia was pleased with the students’ work, but he said they learned a few lessons for next time. The most important is that the posters need to be bigger. The current lot is 8½ by 11 inches, and they are easily overlooked. The other important takeaway is that they need to be displayed earlier in the semester so that students can gather data about viewership before class ends. The assignment was certainly successful, though, Vartia said. 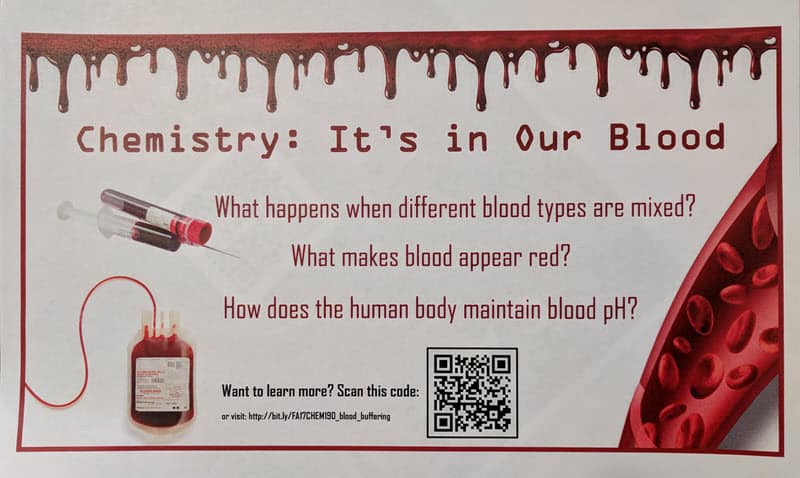 “Traditional writing assignments are typically two-party transactions between the student-author of some research paper and the instructor,” he said. “They do some back and forth and then the utility of the assignment is over. In this case, students were excited that what they were doing mattered to a greater number of people and had the ability to influence people that they’ve never met.”

The posters will remain in place through at least part of the spring semester, Vartia said. If you see one, give it a scan.

As a student at the University of British Columbia, he and his cash-strapped roommates fashioned “pretend furniture” from sheet-covered cardboard boxes. When his roommates wanted to add a second phone line for dedicated dial-up Internet access, Jhangiani couldn’t afford the extra $8 a month. His grandfather, who had taken in Jhangiani in Bombay after his father died and his family lost their home, was paying for his schooling. There was no room for frivolous expenses.

He uses his experiences to illustrate that the high cost of textbooks and other course materials are not an abstraction. With state support for higher education declining and tuition rising, many students are forced to work more hours to pay for college. A rising number are relying on food banks for basic nourishment. Two-thirds take out loans.

“It’s really extraordinary when you think about the burden this places on students,” Jhangiani said. “It’s like shackles.”

Jhangiani, a university teaching fellow and a psychology instructor at Kwantlen Polytechnic University in Vancouver, B.C., spoke at KU as part of Open Education Week. He stressed the close ties between open educational practices and social justice, mixing the personal and the practical as he made a case for embracing free and low-cost course materials.

College instructors long ago ceded academic freedom to textbook makers, Jhangiani said, and follow an absurd approach of mapping their courses onto textbooks rather than the other way around. That has given textbook makers power to charge more than $400 a book in some cases, creating what Jhangiani calls a “second tuition” for students.

As a result, students do a sort of cost-benefit analysis with course materials. If they can get by without buying the materials, they will, even if it means a lower grade. If they must buy a book, they search for an older, cheaper version or a pirated online version.

The cost of course materials has a real impact on learning, Jhangiani said, and instructors need to pay closer attention to the costs of materials they assign. He advocated for the use of open educational resources, which are often known as OER. Those resources are not only free but can be remixed and remade to fit the needs of students and instructors.  Many people have the perception that something free isn’t as good, he said, but much time, effort and even peer review goes into making OER materials available.

Jhangiani urged instructors to go beyond open educational resources, though, and to adopt open pedagogy, which involves having students create materials that others can use, an approach he called “renewable assignments.” Those involve everything from writing op-ed pieces for newspapers and websites to creating Wikipedia entries and YouTube videos.

Only a fraction of students read the feedback instructors provide, Jhangiani said, providing little benefit to students or instructors.

“Traditional assignments might just be sucking energy out of the world,” Jhangiani said. “Students hate doing them and faculty hate grading them.”

Alternative assignments offer more incentives for students to complete the work, he said. Students often take more time and care in completing them because they know the work will be on display for others to see and use.

“I’m amazed at how much pride students put into these assignments,” Jhangiani said.

These types of assignments also help students think more critically about sources and write more concisely, he said. They improve digital literacy and allow students to collaborate with others from around the world. They also help students work across disciplines, bringing together concepts and approaches from other classes.

When taking that approach, he said, it is important to give students control over their work. Let them choose Creative Commons licenses they are comfortable with. Allow them to later remove online work they decide is inferior. At the same time, scaffold assignments so that students gradually build skills and improve their ability to produce high-quality work.

These open assignments, he said, are not just about meeting the goals of an individual course but about helping students become better citizens. Again, Jhangiani speaks from personal experience. As a student, he was intent on excelling academically and making his family proud. He eventually got a job to help him pay his tuition, earned a Ph.D. and became a Canadian citizen.

This journey from international student to Canadian citizen to an educational leader was not traditional, Jhangiani said, and is “something I fear is becoming less and less likely as we move forward.”

That’s why open education is so important. It provides a means of lowering costs and helping more students earn a college degree.

“I sincerely believe that higher education is a vehicle for social mobility,” Jhangiani said.

His personal journey illustrates that.

Where to find open course materials

Where to learn more about open education practices